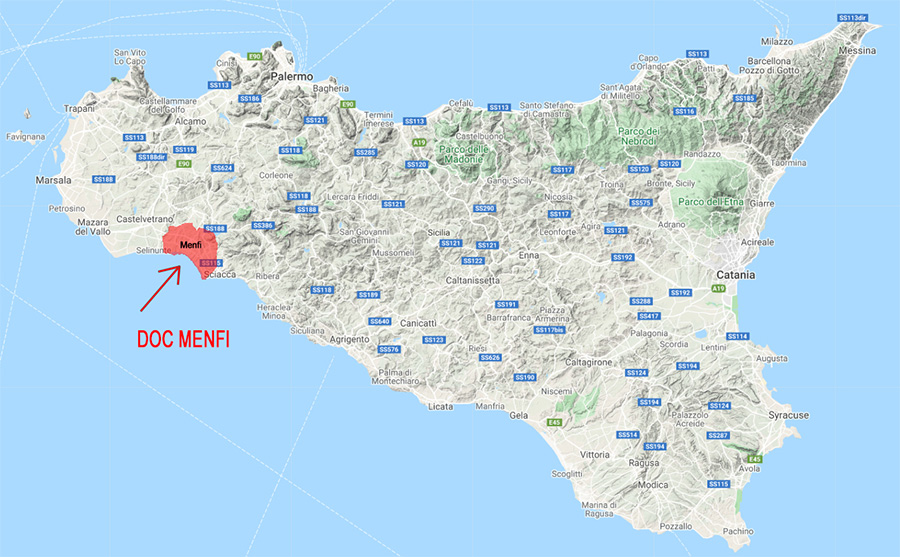 Menfi DOC: everything you need to know about one of the most interesting appellations and wine Regions in Sicily.

Menfi is homeland of high quality wines since time immemorial: renowned in the classical era, the wines of the mythological town named Ynicos have been one of the area's excellent products for twenty-five centuries.

Viticulture and olive growing was already flourishing in this area far before the Greek colonization of Selinunte. Many archaeological relics in the districts of Belìce, Casuzze-Case Nuove, Torrenova, Bonera, Cavarretto and Fiori testify to the existence of prosperous farms as early as the 6th century B.C. Antique treasures have also emerged from the sea off Capparrina and Porto Palo, wine amphorae in particular, proving the existence of export routes for Menfi's produces.

Our modern viticulture grounds its roots in this long Mediterranean history.

DIMENSIONS OF THE MENFI DOC

Officially established in 1995, the Menfi DOC has profoundly changed over until its latest version approved in 2014.

Its geographical area spreads upon the entire territory of Menfi and extends over part of the neighboring municipalities of Sciacca, Sambuca di Sicilia and Castelvetrano, for approximately 3,600 hectares covered with vineyards. However, despite the overall size of the vineyards being very significant, the area claimed by wine growers for the DOC is only about 200 hectares (2018 data – Source: IRVOS). 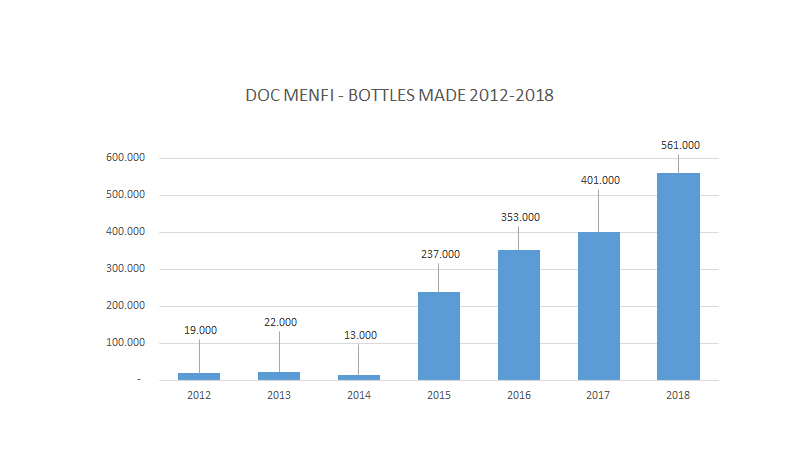 Despite the positive evolution over time, official data still confirm the low incidence of Menfi DOC certified wines on the area’s total wine production: in 2018, approximately 560,000 bottles were made, out of a potential production of about 40 millions.

The reason is simple: in Menfi, the wine Cooperative, which so far shows little interest in the growth of the Appellation, produces most of the wine. Of the 9 private companies in the area, only 2 producers currently account for almost 100% of the Menfi DOC wine.

The Menfi DOC has a semi-arid Mediterranean climate, with mild winters and hot dry summers (Regione Siciliana - Department of Agriculture and Forests).

The entire area lies between the Belìce and Carboj rivers, which flow from Northeast to Southwest and represent the most important watercourses. The respective tributaries, on the hydrographic left for the Belìce and on the right for the Carboj, create the main drainage network for a substantial part of the area

Numerous smaller streams called “valloni” flow within the whole territory, used for irrigation and for the regulation of excess rainfall.

The Menfi DOC territory emerges from the Mediterranean Sea with wide valleys and gentle slopes, intersected by clay and limestone formations that lie on a system of marine terraces dating back 200 million years ago. On the northeastern hills, there are signs of the tectonic clashes between the continental plates of Africa and Europe, sometimes shaped by karst phenomena and mainly covered by natural shrubs and arboreal vegetation.

The soils’ complex configuration and their highly articulated chemical-physical characteristics ultimately influence the vineyards’ type and quality, and shape a rich and varied landscape. 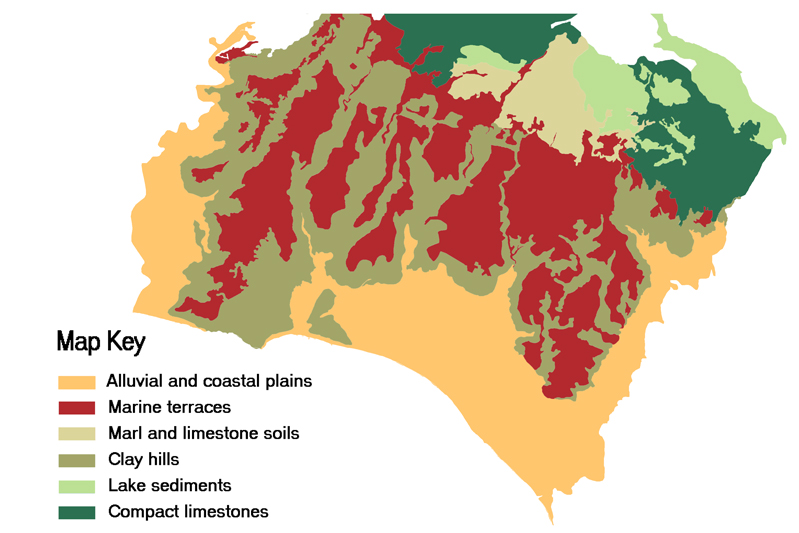 Out of the six soil types of the DOC Menfi, five of them show ideal characteristics for winegrowing, and deeply mark the wines’ personality and taste. 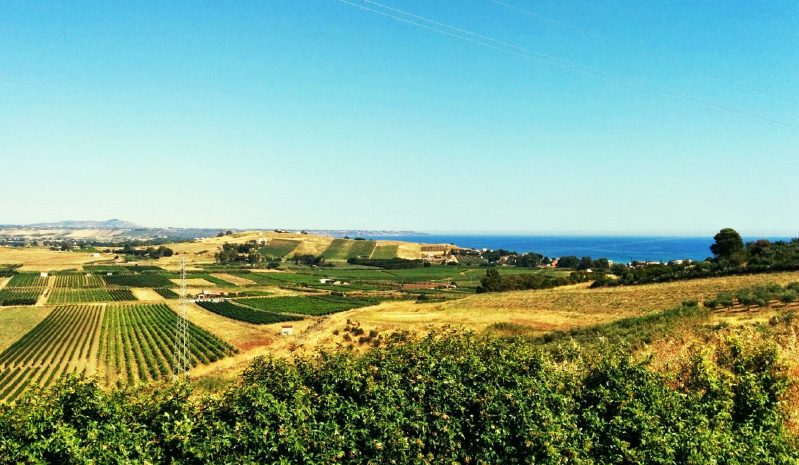 Close to the beaches, where the finest sandy dunes draw a landscape of exceptional naturalistic interest, the alluvial plains represent an intensely cultivated area.

These young soils, emerged from the sea bottom during the last ice age and enriched by rivers’ deposits, created a very fertile area. They are medium deep with a fine texture, and are rich in calcareous sediments that give birth to highly expressive white wines.

The sea influence is pivotal here: the briny air has a strong impact on the vines’ metabolic activities, and the ground waters rich in soluble salts that rise from the subsoil to the roots’ level are able to condition the organoleptic profile of the grapes, accentuating their flavor with a fresh salinity. 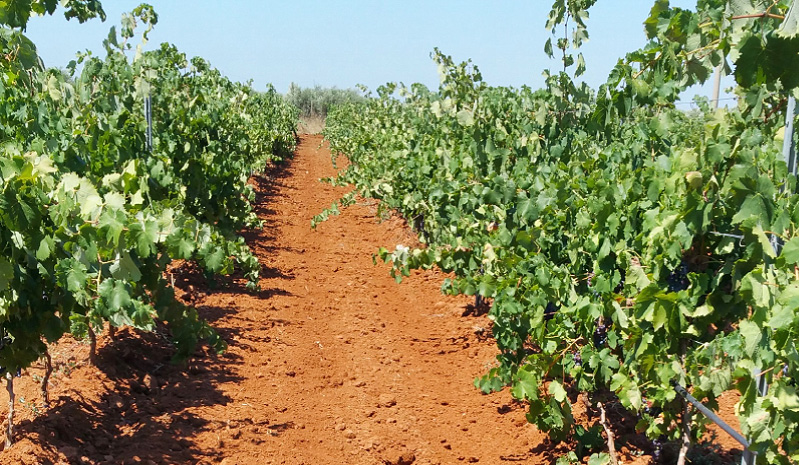 The terraces are among the most interesting landscape units of Menfi’s territory: emerged from the sea in the Pleistocene era, they are made of red or brown-red, sandy, coarse-textured soils, lying on layers of rounded pebbles that create a skeleton-rich substratum.  Ancient and highly evolved soils, with excellent permeability, they are particularly suitable for the adaptation of green and luxuriant vines’ rows that unroll up to the edge of the Magaggiaro Woods.

The wines born from these soils are fragrant and full-bodied, and their pleasant fruity palate is emphasized by the presence of iron oxides . 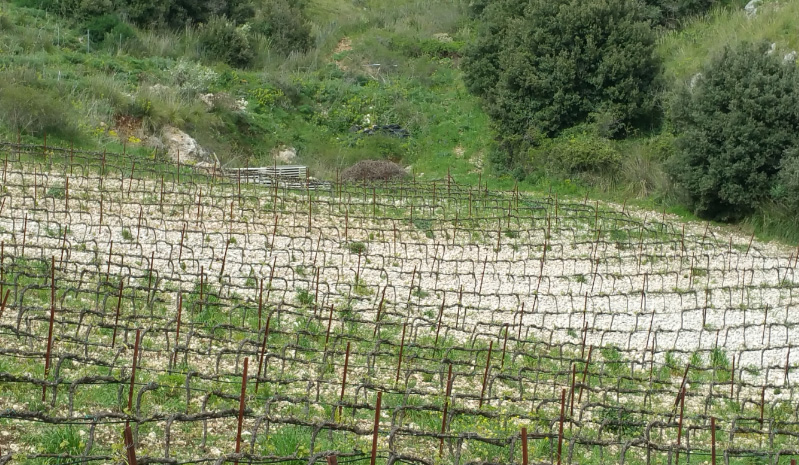 In Contrada Genovese, located in the northern part of the Menfi’s territory, we find an endless alternation of marl and limestone slopes called “trubi”.

They are shallow soils with a whitish color, light olive green shades, and a fine texture, where vineyards and olive groves grow almost in absence of organic deposits. These soils have a very specific influence on the wines: their freshness helps in slowing the grapes’ ripening, and provides intense aromas, a good structure and a high sugar content, all elements that positively influence the wines’ longevity. 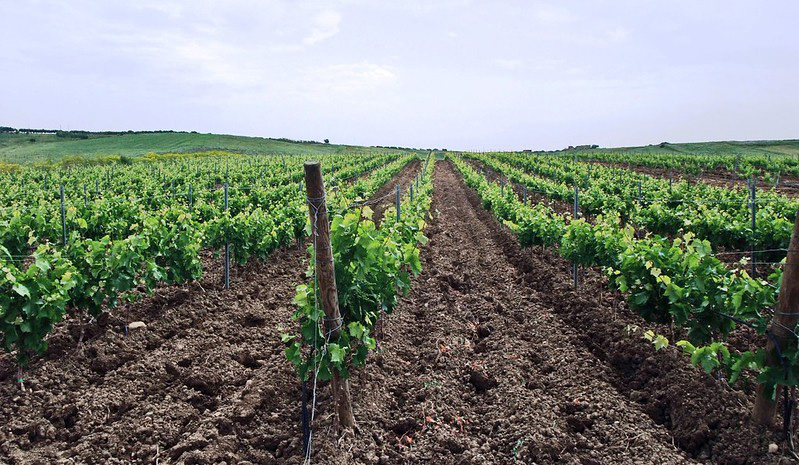 At a short distance from the sea, the land’s outline gets curvy: gentle slopes with deep soils, a fine texture and abundant clay components rise from the alluvial plains. These are the hottest soils, from which the moisture evaporates very quickly during the summer: therefore, deep vertical fractures and cracks appear on their dry crust. In this environment, winegrowers need to manage the scarce water resources wisely, and to dedicate particular care in choosing the varieties that can resist better to a long arid season. 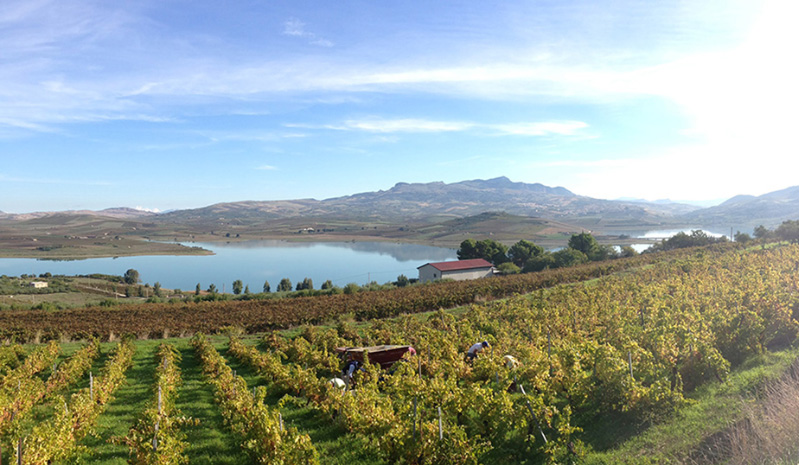 These soils mainly characterize the area west of Lake Arancio, which belongs to the DOC Menfi and is located in the territory of Sambuca di Sicilia. Their slight slopes formed from ancient lake deposits that deteriorated over time. The soils of this landscape system are deep, with a fine texture and scarce skeletal particles.

Thanks to the high concentration of limestone in the layers below the topsoil, the wines produced here show good acidity, pleasant aromatic finesse and excellent overall quality.

They are mountain slopes, made of dolomitic rocks and a shallow topsoil: it is usually fallow land, left to natural pastures or covered with woods.

What man does not use for agricultural purposes is ruled by Nature. The Magaggiaro and Risinata woods are very interesting protected areas: they host a Mediterranean vegetation of holm oaks, durmasts and dwarf palms, roses and bramble bushes, brooms and capers and wild herbs. Both migratory and sedentary fauna finds a protected environment here: hawks and mallards, herons and storks, and infinite types of swallows, swifts, sparrows, teals, woodcocks, larks and thrushes in the sky, wild rabbits and hares, foxes, porcupines and weasels in the underwood.

Menfi has always been the place for field-testing in viticulture, and dozens of varieties have been adapted to this terroir. That’s the reason for including as many as 26 different grapes in the DOC Menfi Appellation, native grapes as well as Italian and international ones. It is probably too much, at least in my opinion: such broad rules result from different winemaking identities changed throughout time, sometimes dictated by temporary fashion trends.

Alongside the "classic" international grapes such as Chardonnay, Merlot, Cabernet Sauvignon and Syrah, planted in the 80s and 90s when Northern Italian markets requested bulk wine from the South, we now find more unconventional, perhaps less justifiable, choices: Chenin Blanc, for example, or Sauvignon, Cabernet Franc and Pinot Noir. Obviously, not a single bottle of Menfi DOC wine has ever been produced with those fancy varieties, at least in my memory.

The oldest and most interesting indigenous grapes belong to the Phoenician and Greek period: fromZibibbo to Inzolia, and from Catarratto and Grecanico to Perricone, these ancient varieties represent the real essence of terroir, and the identity of the Menfi DOC.

Damaschino has Arabic origins, and is now grown mainly in the Marsala area - therefore in the westernmost part of the DOC Menfi, while the Alicante is a heritage from the Spanish domination, dating back between the 16th and the 17th century A.C.

Nero d'Avola and Grillo belong to a more recent era. Nero d'Avola, a native of Eastern Sicily, was introduced in Menfi in early 1900s; Grillo, a hybrid of Zibibbo and Catarratto created by agronomist Antonio Mendola in 1873, arrived shortly after. Both varieties have started to be broadly planted in Menfi only in the past 20 years. 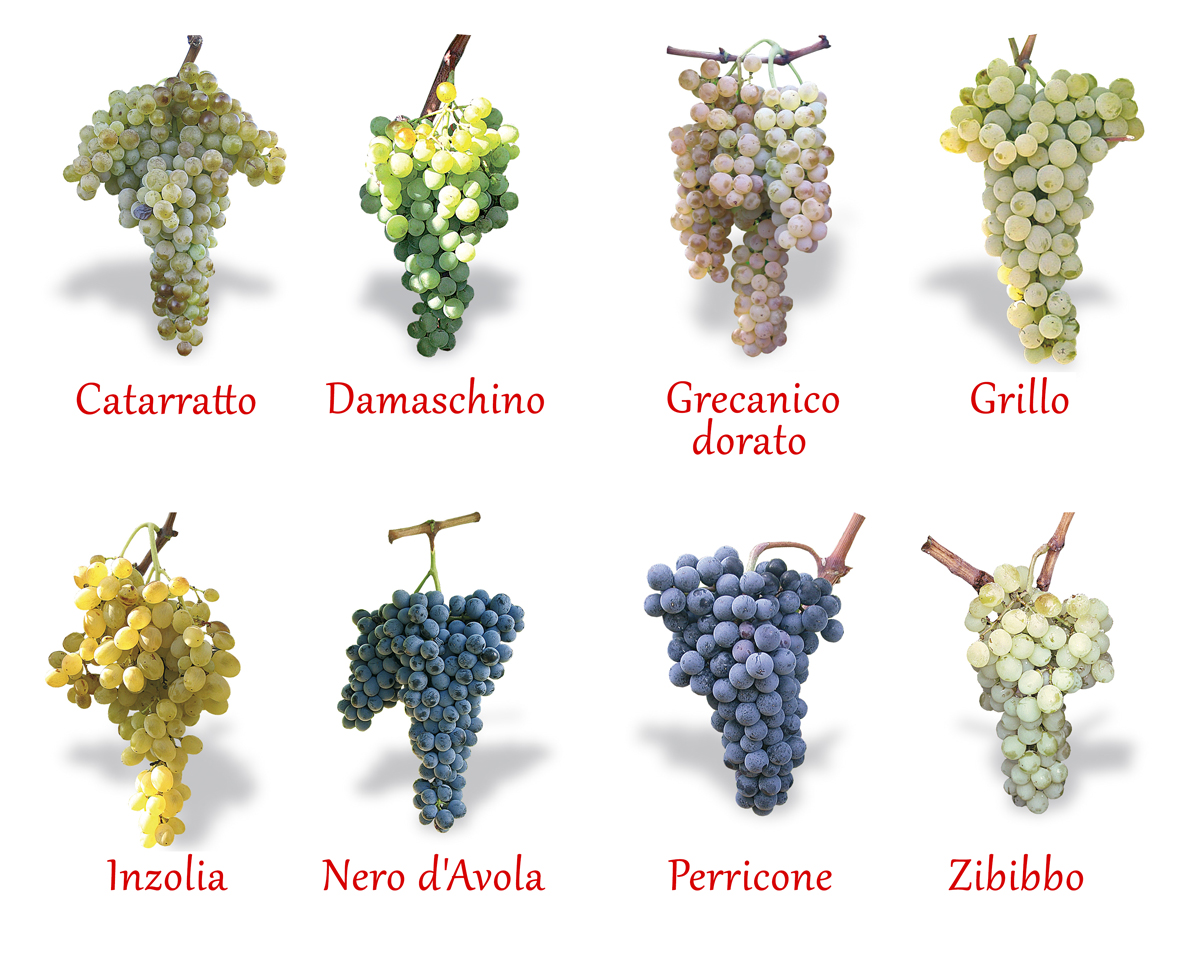