Perricone [PEH-reeh-KO’-neh] is a red grape variety that is indigenous to Western Sicily. It has been cultivated for centuries in the “golden triangle” between Palermo, Trapani and Agrigento.

Very few documents on the origins of the Perricone are available.

During a conference held in Tunis at the Bardo Museum on last March 10th, agronomist Professor Attilio Scienza revealed the most recent results of his studies to the public. He showed how the Perricone has genetically evolved from ancient grapes of Eastern Mediterranean origin during the Greek colonization of Calabria, from where it has migrated to Sicily after crossing with an ancestor of Gaglioppo.

As you can see from the picture below, many other Italian grape varieties belong to the same family: 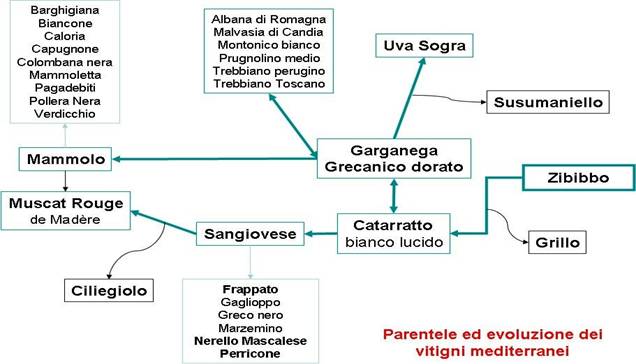 Not many authors have studied the Perricone during Modern Age: among them, Nicolosi recognized the existence of the Perricone in his Ampelographic Bulletin in 1870 and 1883, and Paulsen followed in 1905.
More recently, Pastena mentioned the grape as an independent variety in 1973.

Also known in Sicily under the synonyms Tuccarino, Guarnaccio e Pignatello, during the XVIII and XIX centuries aC the Perricone covered about 34.000 hectares’ in Western Sicily and was mainly blended with other local white varieties (Catarratto and Inzolia) to produce the Marsala Ruby, a dessert wine very similar to red Port.

Its first production crisis began during the phylloxera epidemic that devastated the European viticulture in mid 1800s. Most part of the Perricone vineyards, which showed a high sensitivity to the bug, was highly damaged: only the dedication and the hard work of growers in the region – supported by enormous market requests in Great Britain and in the USA, where the Marsala Ruby was mainly exported – prevented the grape from extinction.

After World War II, the second crisis of Perricone was even more difficult to face: a reduced interest in all fortified wines, due to big changes in the consumers’ preferences, and severe quality issues among many Marsala industrial wineries determined a dramatic and relentless decrease in the production of Perricone grapes that has not yet stopped. Today, the area covered with Perricone is only about 192 hectares’, representing only 0.30% of the vineyards cultivated in Sicily.

At the beginning of the XXI century, the final extinction of the Perricone seemed inevitable.
Notwithstanding, a small number of vintners started to take care of old vineyards and to experiment with more modern winemaking techniques, while paying a great respect to the traditional heritage embodied by this fascinating grape variety. The cultivated areas of Perricone are still decreasing, but at a lower pace, and more growers are slowly joining the group.
This is today our commitment at Cantine Barbera: to defend the existence of Perricone, to protect and respect the terroirs that give birth to this amazing variety and to produce only high quality wines that represent the true identity of our home land.

Perricone is a low productive variety, very resistant to drought.
It is sensitive to the phylloxera insect (even to the one that attacks the vines’ foliage), but is capable to resist many fungal diseases thanks to a thick berries’ skin.
Precocious bud break and mid-season ripening are its general features: an earlier ripening generally occurs along the coastal areas of Sicily, while harvest time begins mid or end of September on higher hills.
Medium-sized and cylindrical bunches often show one or two smaller side bunches; they are very compact and produce small round berries, with a distinct black-blue color and abundant amount of pruine wax on their skin.

Its original terroir is the South-western part of Sicily, where it is cultivated according to traditional pruning systems: sometimes trained as a low bush - historically called “alberello” - the Perricone is more often grown on a vertical trellis, in both cases with a short pruning.

The synonym Pignatello is related to the Sicilian word “pignatidare”, which is used in the Marsala and Trapani area to designate the red clay soils that were used for centuries to make clay pots. This traditional term points out one of the main characteristics of the Perricone, thus its attitude of adapting very well to structured warm clay soils, where it can fully express its flavor potential.

Perricone is a rather difficult grape: its intense tannic character may give birth to rustic and sometimes grouchy wines, especially in the fresher and rainy vintages.
That is why the first keyword for growing Perricone is “selection”: grapes must be perfectly sound and fully ripe to avoid the development of vegetal flavors that may result in a bitter and sometimes unpleasant mouth feeling.

The second keyword is “low yields”, and a careful canopy management to favor a slow and full ripening.
After the harvest, a slow fermentation, a complete malolactic and a long refining are the best winemaker’s allies for producing a superior quality and very fine, noble wine that can age for years.

Perricone is a full bodied and intense red wine, that expresses at its best after a few years in bottles.

Very complex to the nose, it generally shows a spicy character where juniper and black pepper are the dominant flavors. To the palate, spices are balanced by intense fruity notes of sour cherry and blackberry, plums and mulberries, plus a green fine herb touch where rosemary and oregano may add amazing freshness to the overall balance.
Good quality Perricone wines are very elegant – especially in the best vintages – with a solid tannic base gently softened by a good alcohol degree and completed by a long dry finish, sometimes recalling toasted almonds, dark chocolate or roasted coffee.

Some Perricone wines may be blended with other indigenous Sicilian varieties: more often with Nero d’Avola, which contributes to the development of fruity tones, sometimes with Nerello Mascalese, which enhances the wine's acidity and offers a finer aromatic expression supplying a flowery elegant touch.

Serve Perricone in oversized red wine glasses, at a fresh room temperature, and be careful to decant older vintages as they may present deposits. Many Perricone wines can be enjoyed young, but the finest ones will show their complexity only after some time in bottles and can graciously age up to 8-10 years.

Perricone is a great companion for food: it matches perfectly with legumes, matured cheeses, red meats - either roasted or braised - and all spicy food.

Want to know more about Perricone?

Watch the infographic by clicking on the picture,
or  >>> DOWNLOAD THE COMPLETE INFOGRAPHIC
ON  PERRICONE