Frappato: a star is born

From a minor grape variety to a Sicilian superstar, Frappato has enchanted people's palate in a short time. It is a versatile grape: single varietal frappato is easy drinking and excellent companion for food; when blended with Nero d'Avola, it offers structure and elegance.

As for most Italian native grape varieties, the origins of Frappato and the etymology of its name are still uncertain.

There are few written records about Frappato, with the first known document dating back to 1760. Domenico Sestini, a botanist and a viticulture enthusiast, has written about Frappato in his book “Memoriale sui vini di Vittoria”, reinforcing the strong link between the grape and the territory of Vittoria. Based on Sestini's writings and on the fact that the foundation of Vittoria descends from the concession of land to farmers by Countess Vittoria Colonna Henriquez-Cabrera, some authors hypothesized the Spanish origin of the grape.

However, other circumstantial pieces of evidence trace the origins of Frappato back to the Greek colonization in the 6th century BC and, in particular, to the adaptation of Greek grape varieties to the countryside of Kamarina, a city founded by the Syracusans in 598 BC.

Kamarina was a prestigious center of Magna Graecia: its Chora, the cultivated area that served the city basic needs, was full of small farms stretching from the coast to the hinterland, on the hills where the urban centers of Vittoria, Comiso, Acate and Ragusa rise today. Grapes, olives, barley, and wheat were cultivated on these lands, efficiently fertilized by a channeling system that used to deliver water from the Ippari River down to the valley. 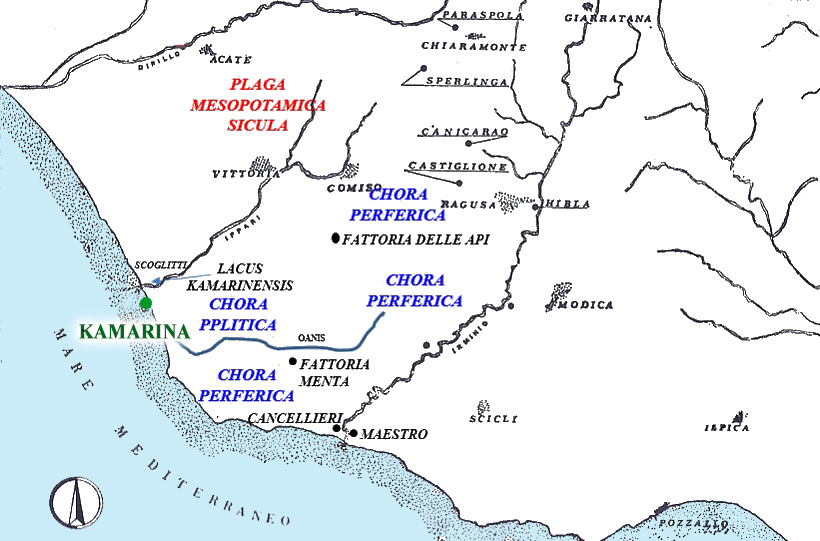 To confirm the Frappato's ancient roots, a reliable genetic study on Sicilian native grape varieties proves that it belongs to the Nerelli family, cultivated in Sicily both in the Eastern part (Nerello Mascalese, Nerello Cappuccio, Carricante) and in the Western part (Perricone) of the Island. All these grape varieties have a close genetic relation with the Sangiovese, which Southern origin is now confirmed. Sangiovese is in fact the crossing result between Greek grape varieties and Italian varieties adapted to Ionian Calabria. 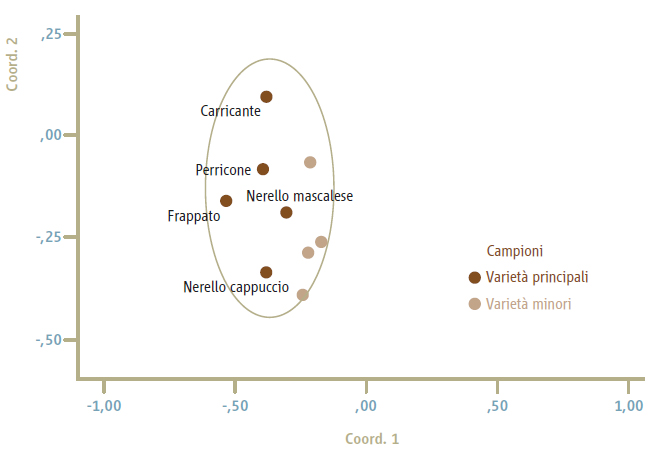 Regarding the etymology of Frappato’s name, several hypotheses have been put forward. Some believe - somewhat naively – that the word Frappato derives from “fruiter”, hence referring to the wine's organoleptic profile. Others believe that the name Frappato comes from the French term “frapper”, pointing out to the jagged shape of the leaves.
Others, perhaps more accurately, believe that the name Frappato comes from “rappatu”, a Sicilian traditional term that can be translated with “many clusters”, referring to the variety’s compact winged bunch.

The success of Sicilian wines on the market, together with the producer’s growing awareness, has generated the success of this native grape variety. Moreover, Frappato is getting fresh attention due to stylistic trends toward lighter wines.

Frappato has medium vigor and moderate productivity. Due to its clusters’ compactness and to its sensitivity to fungal diseases (odium, downy mildew, and gray mold) it adapts better to dry and ventilated climates.

Frappato wines stand out for their intense aromas: the reason lies in their high content in terpenes, norisoprenoids, and benzenoids, three classes of aromatic compounds. However, their specific aromatic qualities depend on the biotype used, while maintaining the essential varietal character: a red fruit freshness. 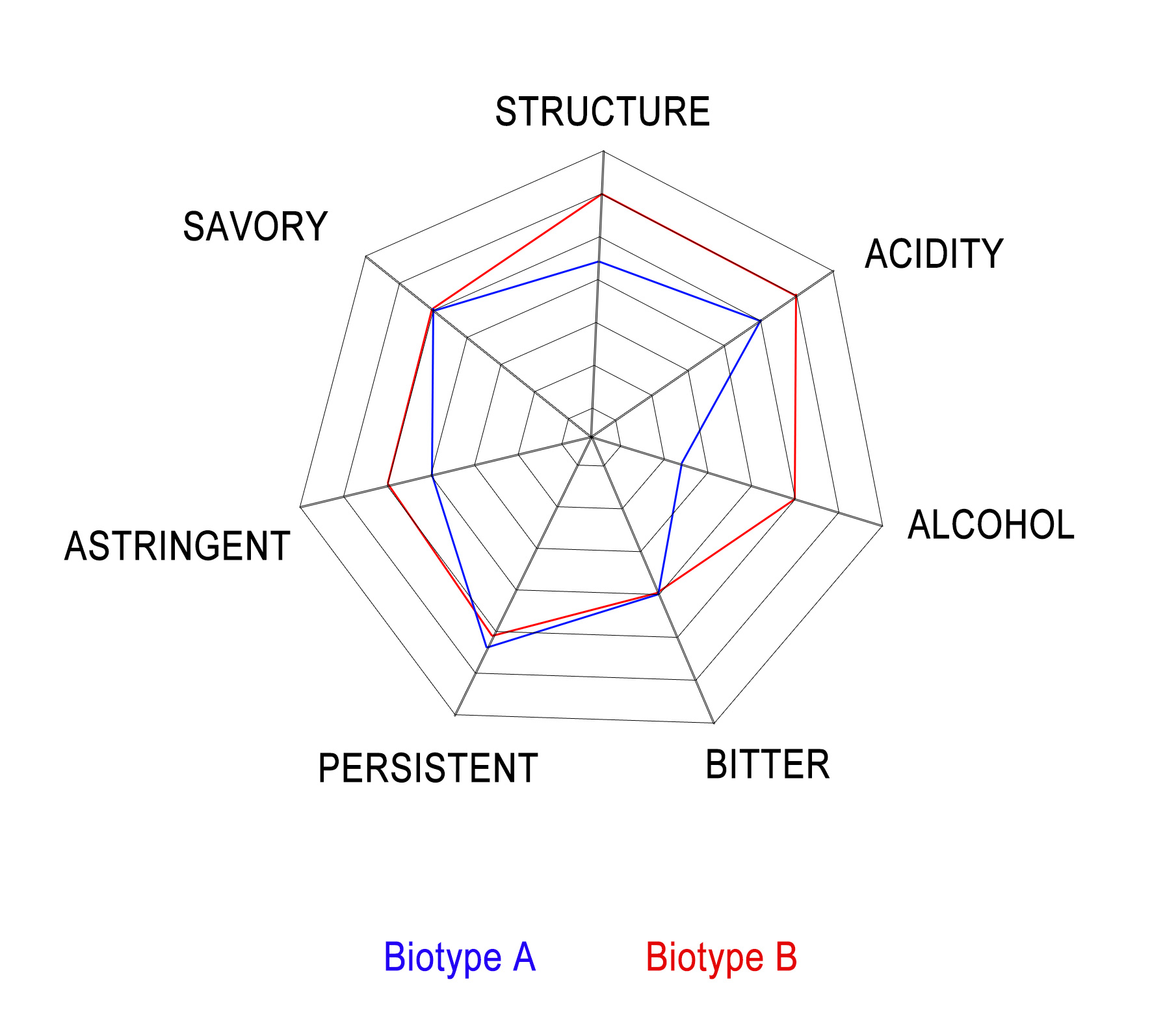 Biotype A is richer in norisoprenoids and benzenoids from which floral notes of roses, violets and lavender, and aromas of strawberry and cinnamon derive.

Biotype B has, on the contrary, a more intense bouquet of black fruit, especially cherry and wild berries, with scents of geranium flowers, spiced and menthol notes.

Both biotypes give life to wines with a bright ruby color, light and transparent, with soft and balanced tannins and a rather thin body.

Frappato can be served in regular wine glasses, at a recommended temperature of 56 - 60 °F (fresh but not too cold), to enhance the delicate taste and pleasant drinkability of this peculiar red.

The most part of 100% Frappato wines are ready a few months after the harvest, while some have a greater complexity and are able to develop their finesse only after an adequate time in the bottle, aging nicely from 4 to 6 years. If blended with Nero d'Avola, as it happens for the Cerasuolo di Vittoria, Frappato produces more intense, structured and durable wines.

A great companion for food, Frappato marries with first courses, such as fish soup and vegetable couscous, or with swordfish, blue fish, white meats and local cured meats and cheeses.

Want to know more about Frappato?
Watch and download the complete infographic by clicking on the picture.
Feel free to use any of the information and pictures included in this article for your studies or presentations, by citing the source.